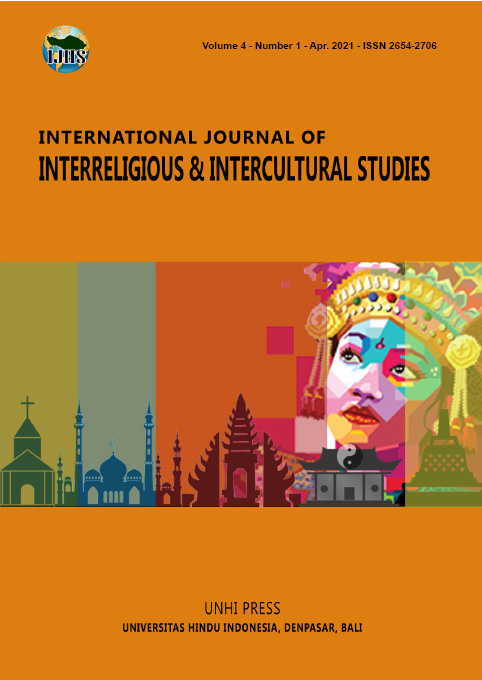 This is the sixth edition of the International Journal on Interreligious and Intercultural Studies (IJIIS), which means that we have published the journal for three consecutive years. Unfortunately, the sixth edition comes at still a difficult moment in history with the ongoing Covid-19 pandemic, which has caused more than 80 million people infected by the novel Corona virus and taken the lives of at least two million individuals worldwide.
But, as they say, life must go on. On October 2, 2020, the Hindu University of Indonesia (UNHI), in collaboration with ICRS and LIPI, held the 5th International Conference on Interreligious and Intercultural Studies (ICIIS). The Conference, whose theme was â€œFuture Cities of the Worldâ€, attempted to examine the trends of the world with respect to urbanization, migration and sustainable cities. As we know, an increasing number of people are migrating from the rural to the urban areas to find better quality of life and employment opportunities.
Indeed, this has caused major shifts in population, demographics and employment sector. Significant changes would also predictably occur in the way cities and urban centers are planned, built and managed. Architectural designs and building would also have to be adjusted to anticipate the multitude of risks associated with over-crowdedness beyond the carrying capacity of cities. What is more pertinent, however, is the way nature and the ecosystem services would work for or against these global trends. The main question and challenge would therefore be: how we could align these developments with the built environment and what seems to be the inevitable environmental degradation or ecological crisis in light of the need for living resources to sustain life on this planet.
This edition has therefore included articles that were presented in the Conference, which try to foresee and anticipate how future cities of the world would be perceived, designed and managed. Grace R. Dyrness instills in us hope and studies how the â€œworld urban poorâ€ looks toward religion in responding to the Covid-19 pandemic. Yekti Maunati examines the cultural identity of cities in Thailand and Vietnam. Meanwhile, Purnamawatiâ€™s article assesses Japanâ€™s waste recycling treatment in Osaki City, and how the sustainable system could be emulated and practised in Indonesia.
Le Ngoc Bich Lyâ€™s fascinating piece centers on Buddhist contributions on truth telling in peace building. Suryaningsi Mila et. al. focus on the feminist cross-textual reading in the context of border-crossing women in Sumba, Indonesia. Subsequently, Syamsul Asri et.al. write about what he termed the â€œGlobal Husainiâ€ in Iraq, which commemorates the tragic martyrdom of a highly revered spiritual leader in Islam. Another article on Shia Islam is written by Neneng Sobibatu Rohmah, who analyzed the persecution of a religious minority in Sampang, Madura, through the notions of identity politics and Indonesiaâ€™s perpetual quest for national integration. The last article is a book review written by I Ketut Ardhana. Here, Ardhana contextualizes and analyzes Peer Holm Jorgensenâ€™s work entitled The Missing History, which could provide a reinterpretation into the events surrounding the September 30, 1965 abortive coup attempt using contemporary lenses.
Finally, and as always, I would like to thank the editorial team for its commitment and meticulous work. With the continuing publication of this journal, I sincerely hope that the articles in this edition would ignite further interest in interreligious and intercultural studies in many different contexts.[]