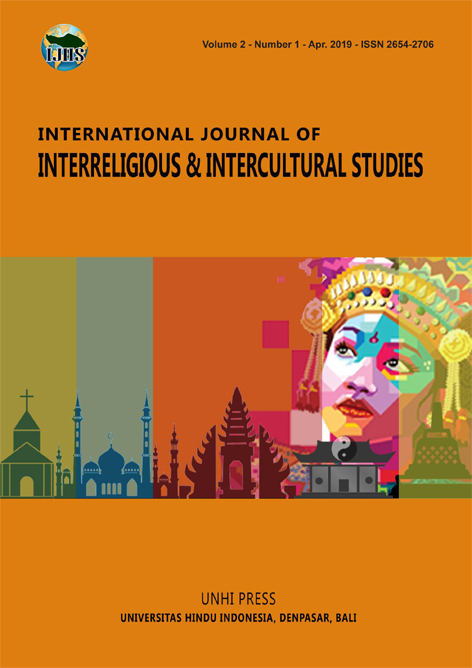 This second edition of the International Journal of Interreligious and Intercultural Studies (IJIIS) features some papers derived from an international conference held at Bali-based Universitas Hindu Indonesia (UNHI) in December 2018. The 2nd International Conference on Inter-Religious and Intercultural Studies entitled â€œReligious Pluralism in Southeast Asiaâ€ was held on December 6, 2018, inviting both Indonesian and overseas scholars from Germany, Thailand, and Malaysia. As usual, scientists from the Indonesian Institute of Science (LIPI) in Jakarta also attended the IJIIS conference.

The conference highlighted the regionâ€™s highly dynamic nature from the long cultural development lens. It assumes the region as a historical meeting point of major civilizations and cultures. However, in contemporary period, the embedded religio-spiritual practices and longtime intercultural relations, in both mainland and archipelagic Southeast Asia, are threatened by the negative impact of globalization and the pervasive disruption caused largely by the Industrial Revolution 4.0. Among others, identity politics, social polarization, religious conservatism and radicalism have played a role in shattering the regional pluralistic legacy.

In that respect, scholars and researchers of the region need to grasp the fast paced development, and inform on such phenomena could potentially and dramatically change the way one conceives of the idea of the nation, state and society. With the increasing irrelevance of national territories and boundaries, how could one make of culture and religion, which are not necessarily bounded in time and space, and let alone national politics? The transnational nature of religion and its global appeal are surely a challenge for all nations of Southeast Asia. And thus, what is the future of citizenship when a good number of humans are interconnected beyond national territories in more ways than just a membership in a modern nation-state? The dynamic political spectrum in the regionâ€”with a mixture of democratic, semi-democratic, authoritarian and semi-authoritarian regimesâ€”also poses a problem in how one defines and characterizes Southeast Asia as an integrated region.

This second edition features nine articles, each having its own unique perspective on religious and cultural pluralism in Southeast Asia and beyond. Joshi, Rajagopala and Kalpanaâ€™s article critically assesses the Balatchturbhadara Churna, an Ayurvedic formulation, for pediatric treatment. Butler examines the praxis of interreligious dialogue through dance performances. Harnish looks at the Lingsar Festival in Lombok from the view of music, identity and interreligious relations.

Meanwhile Wibawa, Gelgel, and Sarjana focused their research on Pada Gelahang marriage from the legal pluralism perspective. Kunphoommari examines Thailandâ€™s unique experience in religious pluralism. Gottowickâ€™s article writes about the visualization of the other in Hindu-Balinese religion. Manuaba, Triguna and Wirawanâ€™s piece studies the â€œcultural povertyâ€ in the life of Hindus in Karangasem, Bali. In the last article, Sarr examines neo-Sufism and the ritual of Slawatan in promoting religious tolerance.

Finally, I would like to personally thank I Ketut Ardhana, I Made Damriyasa, Yekti Maunati, Erni Budiwanti and Dundin Zaenuddin from LIPI for their support and marvelous teamwork. I would also like to thank Made Adi Widyatmika and Stephanie Theng for managing the contributions, superbly editing the articles and laying them out nicely. Last but not least, I am thankful to all the authors for their confidence in IJIIS. I sincerely hope and pray that your contributions will pave for a greater interreligious and intercultural understanding.