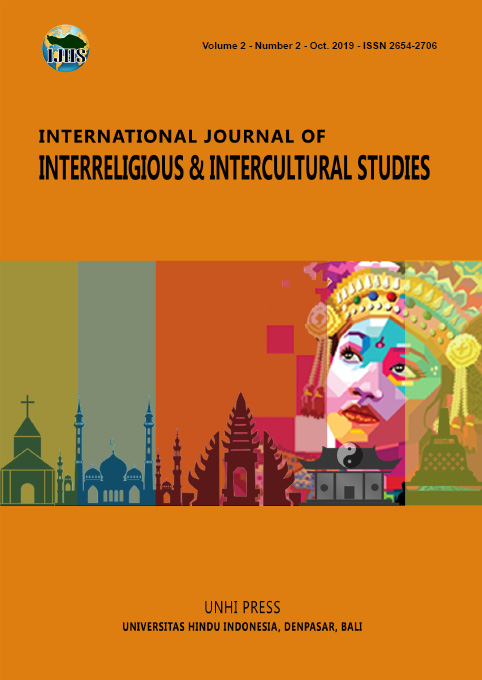 This is the third edition of the International Journal on Interreligious and Intercultural Studies (IJIIS) with some papers that were featured in the international conference held by Universitas Hindu Indonesia (UNHI) on August 30, 2019. The conference, entitled â€œReligion and violence in Asia and Europeâ€, invited scholars from the Philippines, Australia, Germany, and Indonesia. Scholars from UNHIâ€™s partners i.e. Indonesian Consortium for Religious Studies (ICRS) and Indonesian Institute of Sciences (LIPI) also participated actively in the preparation and execution of the conference.
The keynote speaker, panelists, and speakers spoke to the theme from varied perspectives from anthropology, sociology, cultural studies, political science to international relations. The conference essentially posed the question of whether the conflict is intrinsically connected to religion; or whether religion promotes and encourages violence. It also problematizes the frequent prejudice and stereotypical thinking that religious people are inherently radical and intolerant and henceforth closely associated with violent extremism. In recent years, the latter argument introduces to the world the over-exhausted notion of Countering Violent Extremism (CVE), which has manifested in many â€˜developmentâ€™ programs in Islamicate countries or nations with significant Muslim populations.
In this edition, readers are presented with a number of fascinating research articles. Husein presents her research on Indonesian youth experience in an inter-religious dialog. Oza gives an analysis on the issues of equity and equality in India. Meanwhile, Sari provides an insight on the experience of the Cham people in Vietnam on the contestation between and among religious believers.
Ridwan gives us an analysis into the little known phenomenon of religious transnationalism in the province of Papua in the easternmost part of Indonesia. Japee problematizes the predicament of the much-celebrated â€œknowledge societyâ€. And Marek from Hamburg gives us a glimpse of Germanyâ€™s social polarization, which was heightened due to the recent influx of immigrants and displaced people from the Middle East.
Puspitasari discusses the theoretical debate pertaining to the collapse of Suhartoâ€™s New Order regime and unpacked the theories on rational choice and social solidarity. Regus examines the position of religious minorities in Indonesia through democratic transitional processes. Lastly, Castro assesses the difficult relationship between religion and politics based on the outcome of the recent Philippines elections.
In the end, I would like to sincerely thank I Ketut Ardhana, I Made Damriyasa from UNHI and colleagues from LIPI such Yekti Maunati, Dundin Zaenuddin, who have all made this endeavor possible since last year. I would also like to mention Adi Widyatmikaâ€™s discipline and commitment in pushing forward the publication of this journalâ€™s third edition. Without his passion, I would think that this edition would not have materialized in time. I hope this edition will contribute to the already existing discussion and exuberant debate about religion and violence among academics in Indonesia, Southeast Asia and beyond.[]